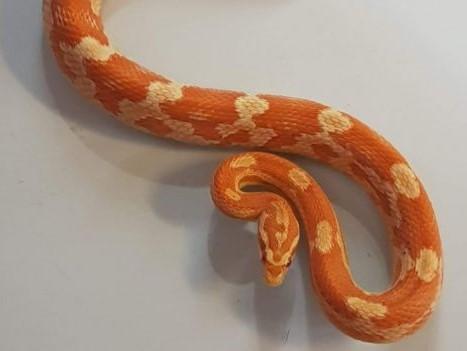 It was the stuff of nightmares for a Leeds man who woke up at 2am to find a 4ft-snake slithering onto his bedside table.

The man – who has been named only as Kelvin – was stirred from sleep by a clinking sound at his home, the RSPCA reports.

When he used his phone light as a torch, he discovered the serpent – a corn snake – just inches from his pillow.

“I dived across the room and switched the light on and it was there, half on the floor and half on the table by my bed,” he told the animal charity.

He managed to trap the creature in a sleeping bag cover before calling authorities to his home in the West Yorkshire city’s Beeston area.

Corn snakes are not native to the UK and it is most likely to have been a lost or abandoned pet, according to Inspector Dave Holgate from the RSPCA, who arrived to help catch the creature during the incident on 9 August.

“Coming face to face with a snake is not what anyone expects to wake up to in the middle of the night,” the animal expert said with admirable understatedness. “It must have been quite a fright.”

But he added: “Corn snakes aren’t venomous and would only be expected to bite if they felt threatened.”

The animal, since nicknamed Tango, is now being looked after at a reptile specialist’s and will be re-homed if no one comes forward to claim it.