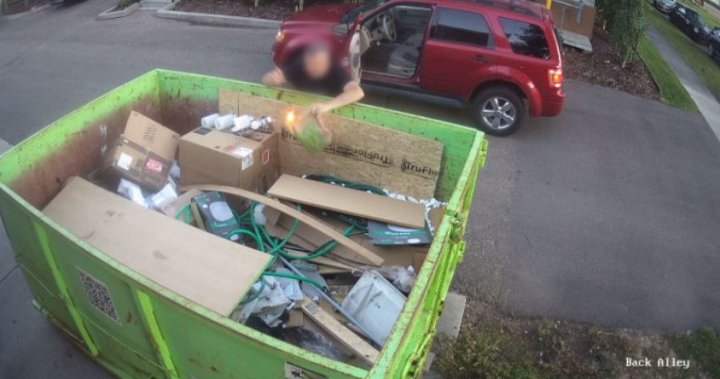 While the fire did not cause any damage outside the dumpster, it’s the manner in which it was apparently set that shocked those who live in the area.

Bonnie Doon homeowner Jayson Crang had rented a dumpster that was placed in the back alley behind his home. A security camera captured a man appearing to be sitting in his vehicle and eating fast food Thursday evening.

The video footage then appears to show the man stepping out of his vehicle, lighting a paper bag on fire and putting it in the dumpster.

In just a few minutes, the dumpster’s contents were engulfed.

Crang said he wasn’t aware of the fire until a neighbour told him about it.  He called the fire department, who arrived just before 10:30 p.m. and put it out before the flames spread. No nearby structures were damaged.

Crang said he has been the victim of other property crimes in the past, but this is different because there appears to be no motive.

The incident upset the president of the Bonnie Doon community league, Duane Gingras.

“To take on such a nonchalant attitude. He hadn’t even finished chewing his last bite of what he was eating and he is lighting a bag on fire and tossing it in the dumpster,” Gingras said.

“There’s no rhythm to it, there’s no reason to it. It makes you distraught and these are the things that start to erode that little foundation of what we call society, where you can’t trust people.”

Residents who live in the neighbourhood were also shocked to see the video.

“I think it’s totally irresponsible and dangerous. That could have burnt down (another) building very easily,” resident Keith Harper said.

“There are trees right above where it was. The trees could have caught on fire, and without proper intervention it could get really bad quick. (It could) spread to other houses — look at how many times there has been a house fire and it has gone to either side.

“Doing that for a thrill is beyond comprehension.”

Police have been notified. Global News has blurred the face of the man in the video, since police have not said it they would further their investigation.