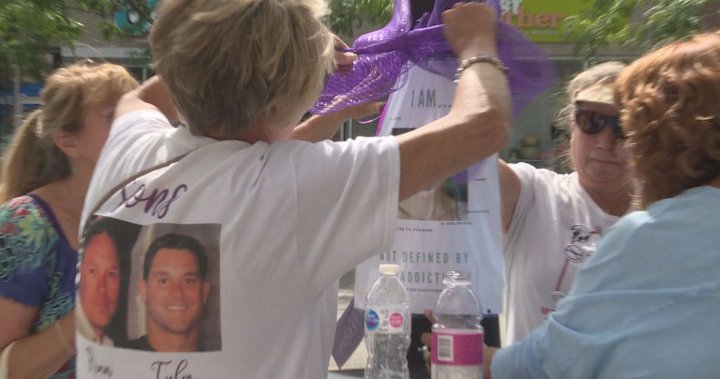 Purple ribbons adorning lamp posts on Kelowna’s Bernard Avenue is an initiative by the advocacy group called Moms Stop the Harm, which has a mission to end substance-abuse-related stigma along with harm and death.

“We just want people to stop and think,” said Helen Jennens of Moms Stop the Harm.

“To think about the people that are dying. I don’t want to see other parents lose their children to a preventable disease and its time that the general public understood this as a medical issue and not a moral failure.”

On Sunday, members of the group, all mothers who have lost children to drug overdoses, took to downtown Kelowna, where they spent the morning placing purple ribbons on lamp posts as a way to mark the upcoming Overdose Awareness Day.

Overdoses are on the rise, the spike being blamed on an increasingly toxic illicit drug supply due to COVID-19. Paramedics in Kelowna saw an 84 per cent increase in overdose emergency calls in July alone, mirroring the rise in calls across the province and these mothers who are mourning their own losses are tying ribbons in hopes of breaking the trend.

Moms Stop the Harm member Arlene Howe lost her 32-year-old son to a drug overdose in 2015 and tied ribbons this morning with her grandson, Mason Mwenda.

“We don’t want Steven to ever be forgotten so it’s important for Mason to do this with me and the other moms so that we can remember our kids,” said Howe.

The heartbroken mothers now asking people to take the pledge to help end the stigma surrounding drug use.

Because of the pandemic, the mom’s group cannot host their annual event marking International Overdose Awareness Day on Aug. 31. The purple ribbons, which now hang along Bernard Avenue from Richter Street all the way to The Sails, are this year’s way of marking the occasion.