Death rates for people of colour in U.S. skyrocketed amid coronavirus, study finds

As many as 215,000 more people than usual died in the U.S. during the first seven months of 2020, suggesting that the number of lives lost to the coronavirus is significantly higher than the official toll. And half the dead were people of color — Blacks, Hispanics, Native Americans and, to a marked degree unrecognized until now, Asian Americans.

The new figures from the Centers for Disease Control and Prevention highlight a stark disparity: Deaths among minorities during the crisis have risen far more than they have among whites.

Read more: Coronavirus is killing Black Americans at a much higher rate

But public health authorities have long known that some coronavirus deaths, especially early on, were mistakenly attributed to other causes, and that the crisis may have led indirectly to the loss of many other lives by preventing or discouraging people with other serious ailments from seeking treatment.

A count of deaths from all causes during the seven-month period yields what experts believe is a fuller — and more alarming — picture of the disaster and its racial dimensions.

People of color make up just under 40% of the U.S. population but accounted for approximately 52% of all the “excess deaths” above normal through July, according to an analysis by The Associated Press and The Marshall Project, a nonprofit news organization covering the criminal justice system. 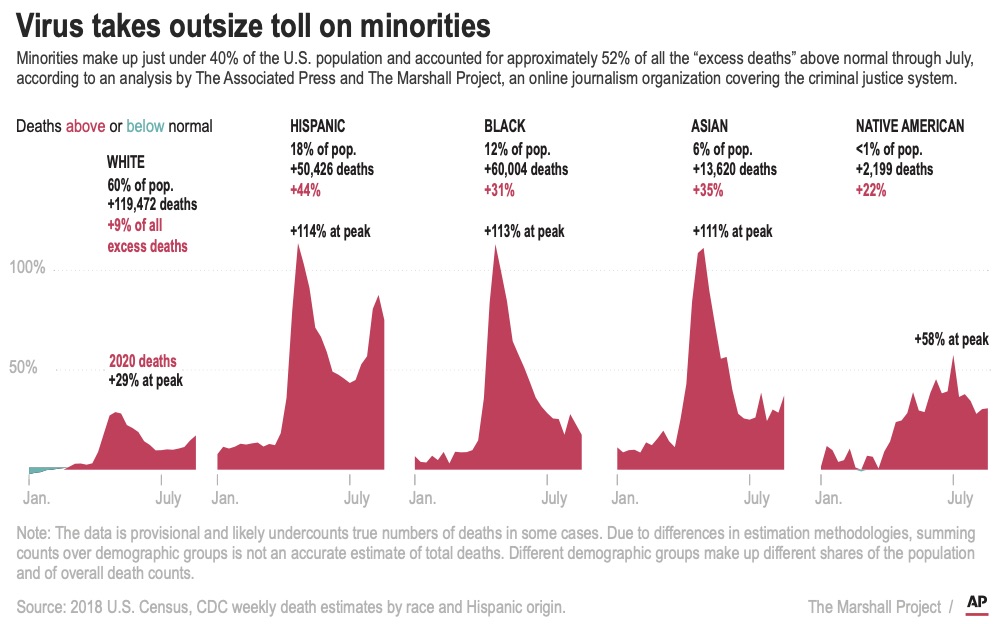 “The toll of the pandemic shows just how pervasive structural racism is,” said Olugbenga Ajilore, senior economist at the Center for American Progress, a public policy organization in Washington.

Earlier data on cases, hospitalizations and deaths revealed the especially heavy toll on Black, Hispanic and Native Americans, a disparity attributed to unequal access to health care and economic opportunities. But the increases in total deaths by race were not reported until now; nor was the disproportionate burden on Asian Americans.