The UK “will not hesitate” to add more countries, including France, to its coronavirus quarantine list overnight if action has to be taken.

It comes after the government announced on Thursday night that travellers returning from the UK from Belgium, Andorra and the Bahamas would now have to quarantine for 14 days.

Chancellor Rishi Sunak was asked if France would join the quarantine list. He told Sky News: “If we need to take action as you’ve seen overnight we will of course not hesitate to do that.”

The finance minister also said the furlough scheme would not be extended for sectors of the economy hit hardest by the pandemic, such as theatre and travel.

Speaking to BBC Radio Scotland, Mr Sunak said it was “wrong to keep people trapped in a situation and pretend that there is always a job that they can go back to”.

The furlough scheme has seen the government paying the wages of people on furlough for the past five months, with business groups and unions calling for it to be extended as some sectors are still unable to open up and local lockdowns occur.

A union survey shows that less than a fifth of teachers think it is safe to reopen schools in Scotland next week.

The Educational Institute of Scotland (EIS) union, the oldest teacher’s trade union in the world, found 64 per cent of teachers support the resumption of classes next week. But only 18 per cent have confidence in the safety measures put in place so far.

62 per cent of teachers said they feel either “somewhat unsafe” or “very unsafe” when asked about returning to work in schools.

Schools in Scotland are to reopen their doors from 11 August, with First Minister Nicola Sturgeon saying pupils should be welcomed back by 18 August at the latest.

But the EIS said a lot more work needs to be done to make schools safer for pupils and staff.

The survey analysed the answers of 24,354 teachers and found 26 per cent said they have faith that sufficient measures such as social distancing and enhanced hygiene routines will be in place – but 60 per cent are not confident that will be the case.

Almost three quarters (72 per cent) want Covid-19 testing to be available to staff whether or not they have symptoms.

Mask wearing becoming the new normal in the UK

As new, extended, mask-wearing rules come into force on 8 August in the UK, this chart, made for The Independent by Statista, looks at how wearing a mouth and nose covering is becoming the ‘new normal’ for the majority of the public.

As detailed by the government, “Face coverings will be made mandatory in a greater number of public indoor settings, such as museums, galleries, cinemas and public libraries” from Saturday.

Martin Armstrong writes: “According to the latest YouGov survey, 69 percent of people in the UK say they already wear a face mask when in public places, the latest in a steep rise since the start of June when only around 20 percent were choosing to do so.

People in the UK have been relatively late in adopting this new behaviour. While countries such as Germany, France, Italy and Spain peaked and levelled off at between 65 and 85 percent around the beginning of May, the UK government, and public, have been far more hesitant.” 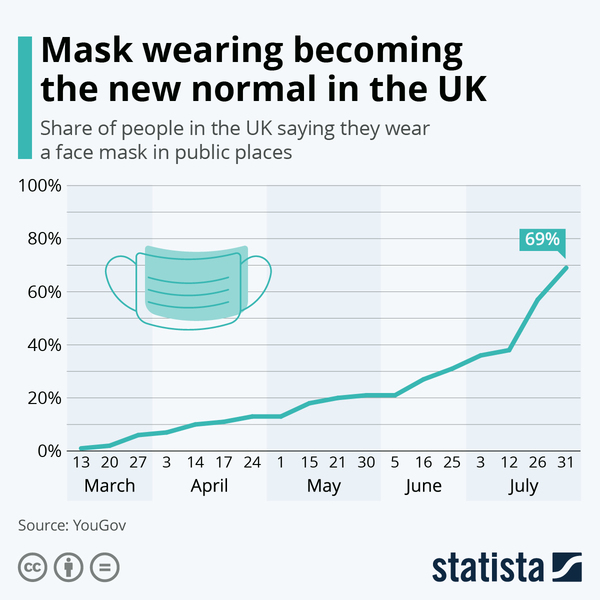 You will find more infographics at Statista

Genexine separately said it was conducting the Phase 1 trial of its coronavirus vaccine on 60 participants in South Korea and plans to announce its results in October.

The cost to go on holiday to popular destinations including Italy, Turkey and Greece more than halved after the government warned against all non-essential travel to Spain.

According to data from TravelSupermarket, searches for Spanish holidays dropped by 80 per cent right after the announcement, whereas searches for other countries increased.

The Home Office is resuming deportations of asylum seekers for the first time since the coronavirus pandemic hit the UK, prompting accusations that the government is “playing politics with public health”.

Up to 20 asylum seekers are scheduled to be deported to France and Germany on Wednesday under the Dublin regulation, which requires asylum seekers to make their claims in the first safe country they arrive in.

The Independent understands there will be no coronavirus testing for deportees or immigration escorts on departure or arrival, which could risk spreading the disease between countries.

Our Social Affairs Correspondent May Bulman has the exclusive:

The landlord of a pub in Staffordshire apologised on Facebook after at least 19 confirmed cases of Covid-19 were linked to the venue.

Custodio Pinto, who runs the Crown and Anchor in Stone, Stoke-on-Trent, said he had not been “strong enough” to ensure patrons observed social distancing.

“I have lived in Stone since 2001 where we have raised our three children and it has always been nothing but the greatest pleasure to be part of this fantastic community.

“However, on 18 July, I accept that I was simply not strong enough in enforcing the Government’s Covid-19 secure rules, despite detailed preparation according to their guidelines.”

Around 1,000 people have been tested after health officials urged anyone who worked at or visited the pub between 16 and 18 July to get checked.

Mr Pinto added: “This virus gives you a false sense of normality while all around you seems ok. My error of judgement is down to me not being able to react quickly enough to the rapidly evolving situation, and for that I would like to apologise.”

Israel to start human trials of coronavirus vaccine in mid-October

Israel has announced it will begin testing a coronavirus vaccine created in its national laboratory on humans in mid-October.

Defence minister Benny Gantz said on Thursday there were recent “advancements in the development of the vaccine and antibodies for the coronavirus” following a visit to the Institute of Biological Research in Ness Ziona.

According to The Times of Israel, Mr Gantz said tests on people should begin after the Tishrei holidays, which ends on 10 October.

“This will be done in coordination with the Health Ministry and according to the protocols needed in terms of medical safety.”

The director of the Institute for Biological Research, Professor Shmuel Shapira, said the vaccine was “terrific” and he believed it would be successful.

Young women especially vulnerable to depression and anxiety during lockdown

A new study has found young women are the most likely group to have suffered high levels of depression, anxiety and loneliness during the coronavirus lockdown.

19-year-old women were the most likely to experience poor mental health during the lockdown period, with 30-year-olds being the second most likely to suffer.

Our Women’s Correspondent, Maya Oppenheim, reports on the study:

Thousands of British Airways staff will find out on Friday if they will be made redundant as the airline moves to cut up to 12,000 jobs as a result of the coronavirus pandemic.

Cabin crew, engineers and airport staff will receive letter revealing what their future at the airline well be, while many who will be able to keep their jobs face pay cuts.

The airline insisted it is trying to “protect as many jobs as possible”.

According to PA, around 40 per cent of cabin crew – generally those at the lower end of the pay scale – will receive a small increase in their salary.

But others will see their basic pay cut by 20 per cent. Many claim their total earnings will be reduced as much as 50 per cent due to other changes to the terms and conditions of their jobs.

BA has been criticised for its treatment of staff, which was branded as a “national disgrace” by a report published by the Commons’ Transport Select Committee.

People not giving contacts to Test and Trace out of fear of putting friends and family in a ‘difficult position’, says Manchester mayor

The Mayor of Greater Manchester has suggested people are reluctant to give the names of people they have come into contact with to the Test and Trace programme out of fear of putting friends and family in a “really difficult position”.

Andy Burnham said people are worried about having to take two weeks off work to self-isolate if they know they will not receive pay or be at risk of losing their job.

The NHS Test and Trace will not be effective until this issue is addressed, he said. A solution to the issue may be to treat the contact tracing system as something “that’s akin to jury duty” with people being able to self-isolate on full pay.

He told BBC Radio 4’s Today programme: “The average rate the last time I checked was that people were giving the names of two and a half contacts, which suggests to me that some people are not producing names because they know their wider group of friends and family would be put in a really difficult position.

“And I think we need to do something here that’s akin to jury service, you know, when you get a request to serve on a jury you’re being asked to fulfil your public duty, and a request from NHS Test and Trace is similar because it’s in the wider good of the local community that you take that time off work.

“So it shouldn’t be that people are being kind of prevented from doing so by financial worries or worries about their job.”

Britons planning to travel to or from destinations on the continent now face uncertainty about whether they will need to make alternative arrangements to avoid Belgium and Luxembourg, which could involve detouring by hundreds of miles.

The way Boris Johnson handled the issue of his top aide, Dominic Cummings, breaking lockdown in May had a “negative and lasting” impact on the public’s confidence in the government, a study has revealed.

The controversial trip made by Mr Cummings may have resulted in reduced compliance with lockdown and the study showed that public trust never recovered from Mr Johnson’s refusal to sack his top aide.

Furlough scheme will not be extended beyond October, says Chancellor

Rishi Sunak has said winding down the furlough scheme, which ends in October, has been “one of the most difficult decisions I’ve had to make”.

He told BBC Breakfast: “I think most reasonable people will say ‘gosh, that’s not something that can carry on forever’. In common with almost all countries around the world… their versions of this are slowly being wound down toward the end of the year.”

The Chancellor did not commit to extending the scheme if a second wave of coronavirus causes another national lockdwon, and said it was not helpful to “speculate on every potential situation that might arise”.

“It’s not something that we want to see happen and we’re doing everything we can… to stop that from happening.”

How do the latest travel restrictions affect my holiday?

Following surges in coronavirus cases in Andorra, Belgium and the Bahamas, the government announced on Thursday night that all travellers returning from those three countries will have to quarantine for 14 days.

Our travel correspondent Simon Calder has all the answers to your questions:

The government will add more countries to the quarantine list if necessary, finance minister Rishi Sunak said on Friday.

Asked if France would be added to the list – which already contains Spain and since last night, Belgium, Andorra and the Bahamas – Mr Sunak said the government “will of course not hesitate to do that”.

He added that during a global pandemic, there was a risk that people would have their travel plans disrupted.

“It’s a tricky situation,” he told Sky News. “It’s the right thing for us to do to keep everything under review on a constant basis talking with our scientists, our medical advisers and if we need to take action as you’ve seen overnight we will of course not hesitate to do that, and we’re doing that to protect people’s health.”

Good morning and welcome to The Independent‘s liveblog on all things coronavirus.