As it happened Ended

Thousands of people gathered in UK cities to stand against racism and demand change after the death of George Floyd in US police custody.

Government ministers urged people not to gather in large groups to protest, with police warning that protests could be unlawful under coronavirus lockdown rules. The demonstrations were largely peaceful apart from a clash between protesters and police near Downing Street on Saturday evening which saw a police officer knocked from a horse and graffiti daubed on the Cenotaph in Whitehall.

Please allow a moment for the liveblog to load:

Hello, and welcome to The Independent‘s live coverage of today’s anti-racism protests in the UK.

Government ‘understands why people upset’ but urges against protests

After Boris Johnson used the words “everybody’s life matters” to caution against physical protests in the face of Covid-19, health secretary Matt Hancock insisted he understood people’s anger as he echoed the plea to avoid demonstrations.

“Like so many I am appalled by the death of George Floyd and I understand why people are deeply upset but we are still facing a health crisis and coronavirus remains a real threat, Mr Hancock said.

“The reason that it is vital that people stick to the rules this weekend is to protect themselves and their family from this horrific disease.

“So please, for the safety of your loved ones, do not attend large gatherings including demonstrations of more than six people.”

Home Secretary Priti Patel tweeted: “Please for the safety of all of us, do not attend large gatherings – including protests – of more than six people this weekend.

“As Matt Hancock said, coronavirus remains a real threat and people must protect themselves and their families from this horrific disease.”

Colin Drury has more on the actions planned this weekend. Some protests are planned for tomorrow, including one outside the US embassy.
Advertisement
Our correspondent Gemma Fox has these images from the London protests. 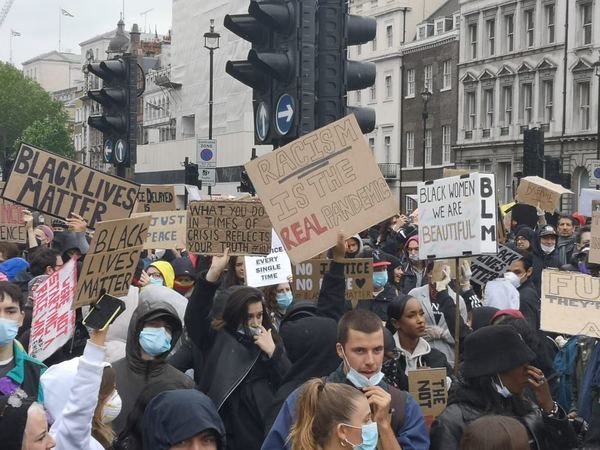 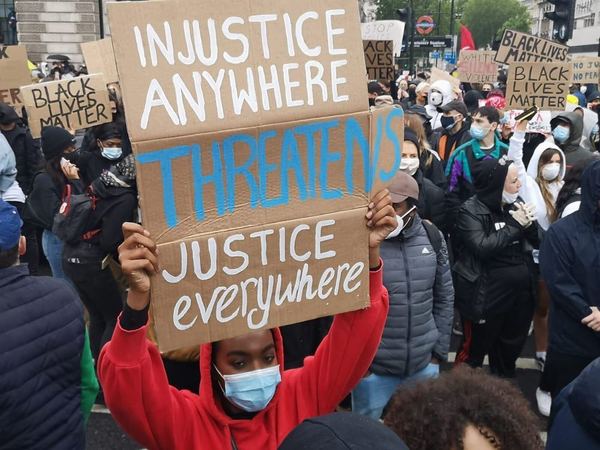 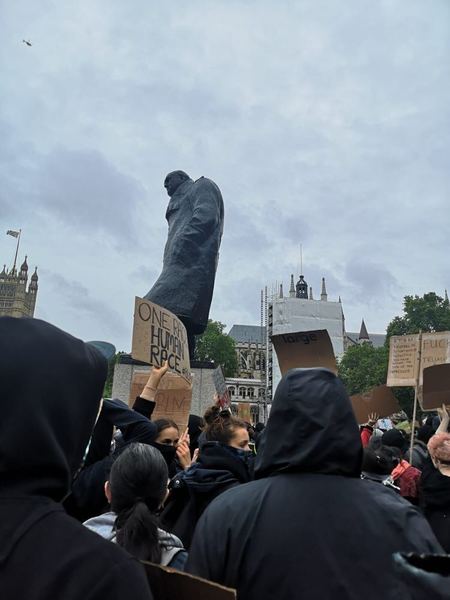 Newcastle MP Chi Onwura opened a protest streamed live on Facebook, viewed by thousands of people and organised by Stand Up to Racism, who have helped coordinated many of the events in recent days.

He told BBC Radio 4’s Today programme: “The health protection regulations are really clear that it is unlawful.”

Our correspondent Gemma Fox reports that the protests are peaceful, and only getting busier, with police currently keeping their distance. Meanwhile, Parliament Square is ringing out with chants of “Boris is a racist”.

The prime minister has previously used racist slurs, also writing that seeing a “bunch of black kids” makes alarm bells go off in his head.

He also denies stoking anti-migrant fears about Turkey and the Syrian refugee crisis during the Brexit referendum, for which there is clear evidence to the contrary.

Police clamp down on protests in Northern Ireland

Police in Northern Ireland are conducting checks on roads and at transport hubs, warning anyone travelling to take part in a demonstration can expect to be stopped, advised to return home and could face a fine or court appearance.

Assistant Chief Constable Alan Todd issued a strong appeal to the public not to take part in protests this weekend, adding any gathering of more than six people is against coronavirus regulations, as is travelling for a protest.

The Assistant Chief Constable also warned that if advice not to assemble is ignored, police may move to enforcement.

On Friday night, organisers of Black Lives Matter demonstrations in Belfast and Londonderry indicated they planned to proceed with social distancing measures in place.

However, planned protests in Newry, Portadown and Omagh have been cancelled.

‘It feels like we’re at the bottom of the pile’

The Independent‘s Gemma Fox reports that while the protests are very peaceful, people are also feeling great anger, with chants of “I can’t breathe”, “no justice no peace”, and “Boris Johnson is a racist”. Two helicopters are surveilling the demonstrators, but law enforcement are keeping their distance.

Advertisement
Protesters in London are marching towards the Home Office – which in recent years has overseen the UK’s “hostile environment” policies.

Residents have been banging on pots and pans out of their windows on properties along Vauxhall Bridge Road in central London.

Cars stopped along the road and beeped in time with chants of “black lives matter”.

Protester Claudia Jones, taking part in the rally in central London, has raised concerns about black history and the national curriculum.

“We haven’t really been educated about our history,” she told the PA news agency. “You have to do the research yourself, that’s what I’ve had to do. It should be in schools.

Demonstrators handing out free PPE to protesters
Advertisement
‘No justice, no peace, no racist police’

With protesters on the move, some reportedly in the direction of the Home Office, chants of “no justice, no peace, no racist police” are filling the streets.

The UK police has previously faced accusations of racism, with the 1999 MacPherson report published after the murder of Stephen Lawrence concluding the police response was “institutionally racist”.

Former Equality and Human Rights Commission chair Trevor Philips said a decade later that this was no longer true. Black people in the UK continue to face disproportionately high rates of stop and search, arrests and use of force.

Vast crowds have turned out in Manchester for a second day of peaceful protest.

Here’s some footage of the action from social media and images taken by photojournalists, some showing demonstrators taking the knee in solidarity, and others scaling the square’s Queen Victoria statue.

Here’s some more footage of the Manchester protests in Piccadilly Gardens.

Rough estimates would suggest the number of people turning out across the UK is possibly reaching the tens of thousands.

Advertisement
Thousands of people protesting in central London have passed over Vauxhall Bridge and are walking in the direction of the US embassy.

The majority of those marching are wearing masks and face coverings, and appear to be adhering to social distancing by walking in small groups.

While law enforcement appear to be keeping a distance from protesters today, here’s one surprising encounter with the law at Wednesday’s protests.

A woman wearing a “F*** Boris” T-shirt was stopped by British Transport Police in central London and told her clothing was against the law, Samuel Osborne reports.

Footage uploaded to YouTube on Thursday claims the unidentified woman was leaving the Black Lives Matter protest on Wednesday when she was approached by two officers.

In the footage, filmed at Oxford Circus, the woman asks: “You think it’s illegal for me to have this T-shirt on? Based on what law?”

One officer replies that it violates Section 5 of the Public Order Act, which states it is an offence to use “threatening words or behaviour, or disorderly behaviour” or display “any writing, sign or visible representation which is threatening” while “within the hearing or sight of a person likely to be caused harassment, alarm or distress thereby”.

The woman asks incredulously: “Why would that cause harassment? To who?” The officer replies: “To other people. People will find that offensive.”

British Transport Police said: “Our officer approached the individual in a courteous and professional manner and legitimately challenged them for wearing an item of clothing that contains an obscene word that could cause alarm or distress.”

Protesters have been highlighting the names of black people who have suffered or died at the hands of UK police forces, such as Mark Duggan and Julian Cole.

While 163 people have died in police custody in England and Wales in the past decade, no officer has been prosecuted concerning the death of someone in custody since 1969.

When looked at in relation to the population as a whole, black people are twice as likely to die in police custody, however this is likely due to higher rates of incarceration, and deaths in custody are roughly proportional to prisoner ethnicity in England and Wales, official figures show.

However, research has found that black communities face disproportionately high rates of stop and search, arrests and use of force.

The director general of the Independent Office for Police Conduct, Michael Lockwood, writes that while the UK has a strong – and very different – system of accountability to that in the United States, but the police service must be open to change.

Advertisement
Our video team has compiled this footage, taken by our correspondent Gemma Fox.

Cars horns can be heard blaring in support of protesters, while some chant “UK is not innocent” and “black lives matter”.

Bristol protesters highlight 8 minutes and 46 seconds in lead up to George Floyd’s death, as hundreds turn out in Bath

While a larger protest is planned in Bristol tomorrow, hundreds have still come out today. The SWNS agency has captured this tribute to George Floyd, who was pronounced dead in hospital after the now former Minneapolis police officer Derek Chauvin pressed his knee into his neck for nearly 9 minutes, removing it from an unconscious and handcuffed Mr Floyd only after paramedics asked him to.

Meanwhile, a documentary photographer specialising in protests describes a demonstration in Bath as “absolutely phenomenal”, forecasting Bristol’s event tomorrow will be unlike anything seen for some time.

Author Phil Chamberlain has an image of the demonstration.