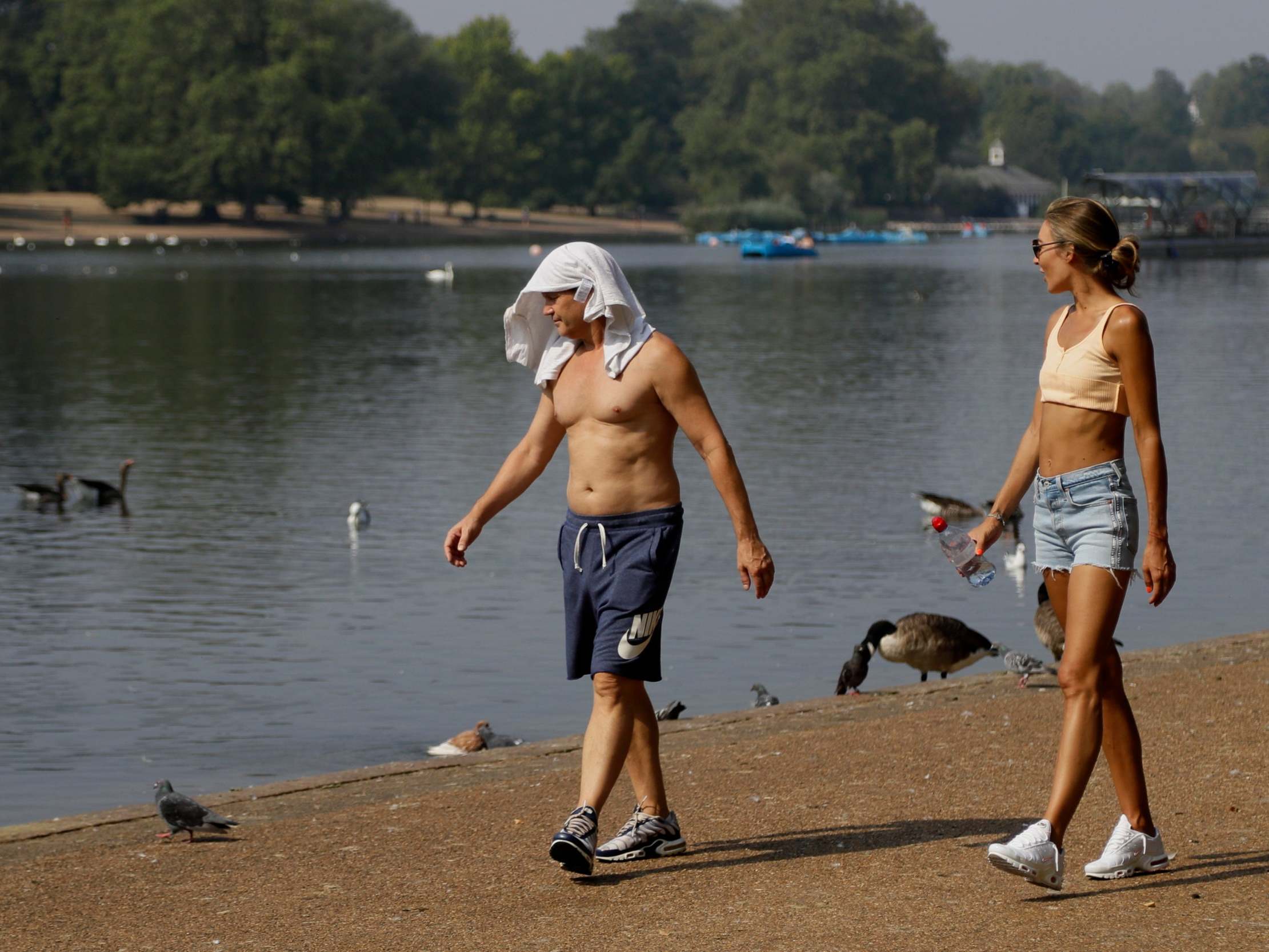 Temperatures of more than 34C have been recorded for the sixth day in a row in the UK for the first time in six decades.

However, storms and heavy rain are set to lash large swathes of the country, with the Met Office issuing a yellow thunderstorm warning covering much of England, Wales and parts of Scotland. Forecasters warned of the potential of hail, frequent lightning and flash flooding in some areas.

Temperatures reached 34.6C in St James’s Park in central London on Wednesday, marking the first time since at least 1961 that there had been six consecutive days of 34C and above.

It was also the third day in a row of the mercury hitting 35C or above, with Wednesday’s highest temperature of 35.4C later recorded at Heathrow, according to the Met Office.

Forecaster Greg Dewhurst said: “It’s not often we get temperatures this high over several days, and that is triggering thunderstorms across parts of England and Wales.”

Severe storms could see 30 to 40mm of rain falling in less than an hour in some places, which comes after heavy downpours lashed large parts of Scotland and caused flooding on Tuesday evening.

“If rain is falling on places that have been quite hot and dry, and the ground is quite hard, the rain doesn’t have anywhere to go, and from that we can see flash flooding,” he added.

Three people died in a train derailment in Aberdeenshire after a ScotRail service crashed on Wednesday amid heavy rain and flooding.

British Transport Police (BTP) said those pronounced dead at the scene near Stonehaven included the train’s driver, while six people were injured in the derailment.

Perth and Kinross, the Lothians, Forth Valley and the north-east were among the most affected by overnight lightning strikes and heavy rain.

The Scottish Fire and Rescue Service confirmed it was called to multiple reports of flooding in the Perthshire area, affecting many properties.

Vehicles were recovered from busy roads after they were abandoned and there were reports of internet services being disrupted.

Ten properties in Lancashire were also affected by flooding following overnight storms, according to the Environment Agency.

In a statement on Twitter, the Staffordshire theme park said: “Please do not travel to the resort.

“We will revalidate any guests who have booked a ticket for today and had their visit to Alton Towers Resort interrupted.

“We apologise for the inconvenience caused and look forward to welcoming you back soon.”

Thunderstorms are expected to clear overnight, while temperatures could remain above 20C for “warm and humid” conditions, according to Mr Dewhurst.

Following a grey start to Thursday, there will be sunny spells across much of the country with maximum temperatures of up to 32C in the south east of England.

“It’s still going to be warm and humid and that could then trigger some thunderstorms across parts of England and Wales through the afternoon and evening tomorrow,” he said.

A yellow thunderstorm warning which covers the majority of England, excluding parts of the north-east, has been issued by the Met Office for Thursday.

Further unsettled weather is predicted throughout the afternoon and evening.

Mr Dewhurst added: “Generally, the rest of the week remains unsettled with showers, some of them thundery and heavy, but there will still be some warm, sunny spells at times too.”